Secwepemctsin – Language of the Secwepemc

Secwepemctsin – Language of the Secwepemc

Secwepemctsin contains the cultural, ecological, and historical knowledge which includes: values, beliefs, rituals, songs, stories, social and political structures, and spirituality of the people. The Secwepemc view all aspects of their knowledge, including language, as vitally linked to the land. This knowledge, passed down to the next generation orally, contained the teachings necessary for the maintenance of Secwepemc culture and identity.

The songs, dances, stories, and ceremonies of the Secwepemc were, traditionally, an integral part of daily life; not separate as in many Western cultures. They were absolutely vital in maintaining the values, beliefs, and teachings regarding care of the land and the people.

The songs, dances, and ceremonies keep the Secwepemc tied to the land and they continually remind people of their responsibilities. They perpetuate vital teachings and contain the laws – who may harvest medicinal plants and how it must be done in a proper and respectful way. Secwepemc must sing and pray before harvesting any food, medicines, and other materials from the land. They must make an offering to thank the Creator and the spirits for anything they take. The Secwepemc believe that all living things have spirits and must be shown utmost respect. 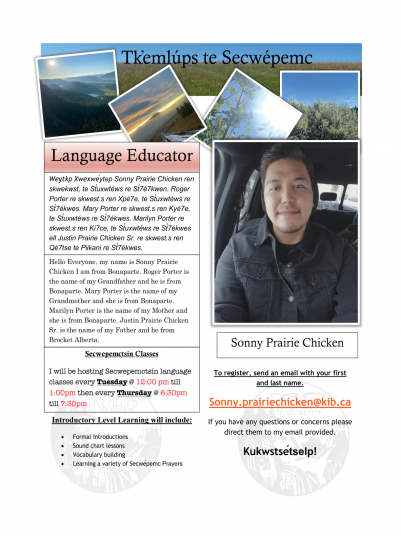