From the Office of the Chief –

On behalf of Tk̓emlúps Council, I would just like to say Yerí7 re sxexé7 (congrats) to all the TteS graduates of 2022. We would like to pay tribute to your hard work and dedication that you have had to get you to this very important milestone – graduation.

Challenges will always be there, so it is up to you how to face them and grow and learn from them.

We also acknowledge and celebrate the teachers that have influenced, inspired and supported you throughout the years.

As you move forward in life, we also want you to carry with great pride your identity as Tk̓emlúpsemc. Never forget your roots and the importance of culture, language, and traditions. These values are what links generations to generations. The recognition of the interconnectedness of all, and respect for our lands, water, medicines, plants, and each other, will help guide you towards a successful future. Try to maintain balance in your life to create health and happiness.

Here are the words I live by: “Know your Passion, Visualize your Plans, Collect your Resources, and always be Determined to Succeed!” I practice those values in both my personal and professional life and share that with all of you as you continue with your academic paths.

We at TteS truly wish you so much success today and in the future!! Congratulations to all the Grads of 2022!! You did it and we wish you success in all your endeavors. Le7es ke7s w7ec wel me7 yews!! ( we wish you the best forever/always!!)

Statement in Support of TteS Members

In consideration of events that have recently taken place, this is a reminder to guests of TteS, that by entering onto our lands, you agree to refrain from disrespecting staff, community members and visitors, with verbal or physical harassment, abusive language, cursing, or threats. We do not condone any videos/pictures/audio being taken of anyone without their consent.

Violators of our protocol will be escorted out.

Anyone who intends on being guests on our lands, are required to uphold our cultural protocols.

Trespassing on our lands is strictly prohibited. Violators will be removed and/or prosecuted.

Please also note that any non Tḱemlúpsemc ceremonial requests must be approved by Chief and Council.

As a precautionary measure to support freshet preparedness Tk̓emlúps te Secwépemc has activated its Emergency Operations Centre to level 1.

This allows TteS to actively monitor dike levels and to begin select protection operations including the stockpiling of sandbags if the need arises.

North and South Thompson Rivers
Due to extended cooler weather in April and May, snow pack melt has been delayed by two to four weeks throughout the province. June 1st 2022 snow pack throughout BC is above normal.

Continued significant risk for high freshet flows and rise of the North and South Thompson Rivers over the short-term is from potential heavy rain to fall on a melting snow pack.

TteS will be increasing the frequency of infrastructure inspections of IR#1 dikes and sealing of catch basins.

Residents are reminded to stay away from creeks and rivers during freshet as high waters are extremely dangerous.

Community Sandbag Volunteers
Those interested can register their interest in assisting with the preparation of sandbags.
To volunteer contact:

TteS will continue to provide updates on water levels and flood preparation activities as necessary.

Please be advised, that the Lands, Leasing & Tax Department (“LLTD”) is scheduled to do the 2022 Property Tax Run, therefore, they will be unavailable for regular day-to-day operations on the following dates:

During these dates either leave a message with the LLTD Receptionist at 250-828-9784 or email the staff and they will reply when they resume regular day-to-day operations on July 4, 2022, at 8:00 AM 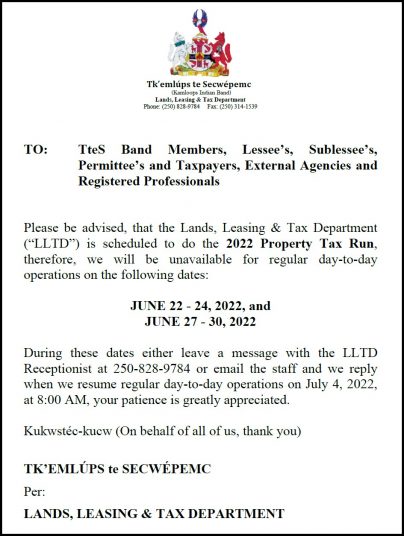 Kamloops and the Tk’emlúps te Secwépemc Receive BC Reconciliation Award

Kamloops, BC — Today, the Office of the Lieutenant Governor of British Columbia, in partnership with the BC Achievement Foundation, announced in a news release that the City of Kamloops and the Tk̓emlúps te Secwépemc have been honored with a British Columbia Reconciliation Award recognizing individuals, groups, and organizations that demonstrate exceptional leadership, integrity, respect, and commitment to furthering the Calls to Action outlined in the Truth and Reconciliation Commission of Canada’s report. Recipients of this provincial award are selected by a committee that includes representation by Indigenous Elders and BC First Nations leadership.

The BC Reconciliation Award comes less than a month after Kamloops Mayor Ken Christian and Kukpi7 (Chief) Rosanne Casimir formally accepted a national Collaboration Award of Excellence from the Canadian Association of Municipal Administrators, which also recognizes the achievements of our communities in building relationships towards reconciliation.

“The relationship we have built with the City of Kamloops is fostering meaningful connections and dialogue leading to initiatives that have had a great benefit to both organizations,” said Kúkpi7 (Chief) Rosanne Casimir. “We are honoured to be recognized for charting this path together and hope to be an inspiration to other communities with similar potential for collaboration.”

For more than a decade, the Tk̓emlúps te Secwépemc and the City of Kamloops have been building on collaborative initiatives in areas of protocol, communication, and celebrations through shared service agreements, including fire protection, transit, and sanitary sewer management. This partnership has grown through a transparent process committed to acknowledging and celebrating Tk̓emlúps te Secwépemc culture, values, and history.

Those years of meaningful relationship building were invaluable when one year ago this spring, our communities bore witness to the tragic confirmation of the unmarked graves of 215 children who were students at the Kamloops Indian Residential School, now known as Le Estcwicwéỳ (The Missing). With the eyes of the nation watching, the Tk̓emlúps te Secwépemc showed vision and strength in sharing their collective grief and in encouraging Canadians to better understand the harmful history and legacy of the residential school system and the inter-generational impacts it has had on Indigenous people.

“This year has been an important reminder that our relationship is one of ongoing reconciliation,” said Mayor Ken Christian. “Because of the enhanced level of trust between our two governments, we’ve been able to face the past together and acknowledge that we may still make mistakes, but we are also looking to the future and can see opportunity and hope in a collaborative path forward. We are honoured by the recognition we have received in this work and are encouraged to continue growing together.”

A formal ceremony to present the BC Reconciliation Award is being planned for the fall.

On behalf of the Tḱemlúps te Secwépemc, we are very pleased to learn of the appointment and mandate of Kimberly Murray to the position of Special Interlocutor for Canada, in relation to unmarked burials. Since we learned of the likely presence of children, L’Estcwicwéý (the Missing) on the Kamloops Indian Residential School grounds, just over a year ago, Tḱemlúps has taken responsibility for them. We are exercising our inherent jurisdiction over the investigation at Tḱemlúps, to determine how many children are there, who they were, who their people are, how they came to be buried there, how they should be cared for, and what justice needs to be sought on behalf of them and their families. We have heard from Minister Lametti, on behalf of Canada, that Canada respects our jurisdiction and is there to provide whatever support it can to ensure that we can meet our obligations to L’Estcwicwéý and their people. The mandate of the Special Interlocutor confirms this.

So many Indigenous communities across Canada are launching similar investigations. It will be painstaking, vitally important work, work that will take time and resources. Canada has an essential role to play in ensuring those resources are available, and that all our communities can find their lost children, and comfort them and their families. The Special Interlocutor will, we hope, work with all our communities to make this happen.

Ms. Murray comes to this role with a wealth of experience and a demonstrated commitment to serving residential school survivors and their families. We look forward to working with Canada, the Special Interlocutor, and our brothers and sisters across the country, as we work for the children, and their relations, to achieve some measure of comfort and justice for them.

On Monday May 23, 2022, Tk̓emlúps te Secwépemc held a memorial commemorating the anniversary of the confirmation of the finding of Le Estcwicwéy̓ (The Missing) near the Kamloops Indian Residential School.

“For those that may not be aware, it is Secwépemc cultural protocol to observe a one-year mourning period after the loss of family. This is how we see Le Estcwicwéý, as our family; a family that we have a responsibility to care for,” Kukpi7 Rosanne Casimir stated.

“It is for that reason, that I was extremely disappointed that attendees of the Memorial were shouting rude remarks and insulting the organizers and guests that had been invited to our community to join us in honouring, upholding, and respecting Le Estcwicwéy̓. Our cultural protocols are sacred and have been in place for thousands of years. These values are based in natural law and cannot be unwritten nor changed by any person or group of people. They dictate that we always hold guests in high regard. In natural law, this is “xyemstwécw”, honouring one another. It is always our intention to create a welcoming and safe environment.”

“The behaviour of a few, disrespected the honour of the day and the Elders, survivors and children that were present. We do not condone the disruptive behaviour. We understand that the day was triggering for some, which is why cultural and mental health supports were available. We also want to thank all of those that followed our cultural protocols and showed their respect”

Kukpi7 Rosanne Casimir stated that for future events, all participants will be required to respect our protocols, or they will be asked to leave.

“I would like to say Kukwstép-kucw (on behalf of all of us, we thank you all) for all the people that attended the Memorial of Le Estcwicwéy̓. Your support was greatly appreciated.”

“We also want to acknowledge all those that are working with us to take steps towards healing and reconciliation.”

~ from the Office of the Chief

On behalf of Council, I wanted to reach out to membership regarding the emergency vehicles within the Mt Paul Industrial Park. Currently there is an ammonia leak at one of the businesses in the area of East Sarcee Street and Mount Paul Industrial Park. Kamloops Fire Rescue is on the scene with a Hazardous Materials Team.

The scene is now stable and the evacuated businesses and other citizens can go about their businesses. One individual was transported to RIH and sadly we can confirm there was one fatality as a result of this incident.

We ask that everyone avoid the area to allow Kamloops Fire Rescue to do their job. The RCMP, Work Safe BC, and the BC Coroners office are all engaged in the investigation. The investigation is ongoing as to how the ammonia was released.

Latest Round Of Ground Penetrating Radar

The latest round of Ground Penetrating Radar (GPR) at Tk̓emlúps te Secwépemc is set to begin later this week.

Under the direction of Doctor Sarah Beaulieu of the University of the Fraser Valley, the GPR operation will be focused on the Chief Louis Centre lands within the CLC Roadway remediation.

Doctor Beaulieu will be supported by Le Estcwicwéy̓ (The Missing) team along with the Tk̓emlúps Natural Resources Department.

The most recent survey work will take over a month to complete.

The latest GPR work comes almost a year after the announcement of the Le Estcwicwéy̓ that were located in unmarked graves at the former Kamloops Indian Residential School. A Memorial marking that anniversary will take place at the Tk̓emlúps te Secwépemc Arbour on Monday, May 23, 2022.